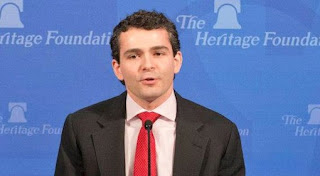 Opponents of gay marriage argue that such unions lead to husbands abandoning their wives and children.
In a July 14 post promoted Thursday by the National Organization for Marriage (NOM), the Heritage Foundation's Ryan T. Anderson, the author of What Is Marriage? Man And Woman: A Defense, argued that the legalization of gay nuptials leads to an increase in the number of single-mother families, which are more likely to be poor.
“Redefining marriage further distances marriage from the needs of children and denies the importance of mothers and fathers,” Anderson said. “Redefining marriage rejects as a matter of policy the ideal that children need a mother and a father. Redefining marriage diminishes the social pressures for husbands to remain with their wives and children, and for men and women to marry before having children.”
Writing at progressive blog Firedoglake.com, Alvin McEwen responded: “Bear in mind that the Heritage Foundation offers no proof that marriage equality leads to single-mother families. And that amazingly brazen leap of logic is why NOM, the Heritage Foundation, and those who support their endeavors against marriage equality are losing the fight.”
Here we go again, the Christian effete trying to blame others for their own inability to assume responsibility for their lives and actions.
The *real* problem Mr. Anderson, isn't homosexuality, it's people like you trying to blame your relationship ineptitude on anyone but yourselves. (probably because pussies like you don't know how to treat women)
Posted by Ulf Raynor at 6:21 PM

Straight men have been abandoning their wives to screw my ass long before marriage equality.