Franklin Graham Thinks You Should Have The Right To Fuck Your Dog And Your Sister...But No Queer Stuff 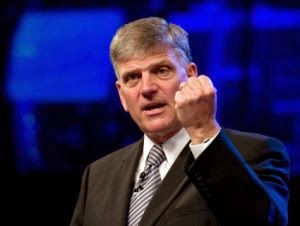 Franklin Graham, the son of evangelist Billy Graham, has praised Russian President Vladimir Putin for protecting children from gay “propaganda.”
Graham, head of the Billy Graham Evangelistic Association, wrote an op-ed praising the Russian leader for signing a bill which prohibits the promotion of gay “propaganda” to minors.


“In my opinion, Putin is right on these issues,” Graham wrote. “Obviously, he may be wrong about many things, but he has taken a stand to protect his nation's children from the damaging effects of any gay and lesbian agenda.”
President Barack Obama “and his attorney general have turned their backs on God and His standards, and many in the Congress are following the administration's lead,” Graham said. “This is shameful.”
Graham called it “sad” that America's morality on this issue had fallen below Russia's standard.

Since Franklin seems to know ol' Vlad so well, I must assume he approves of the fact both incest and bestiality are legal in Putin's Russia, yup, in this assholes eye's it's okay to fuck your dog and your sister, your mother or even sheep, but homo's...now that's just sick, immoral and Godless!
You do have a point though Mr. Graham, it is *shameful* and *sad* but that shame is yours and one you share with so many other so called Christians.
Who is protecting the children from people like you?
Posted by Ulf Raynor at 12:33 PM