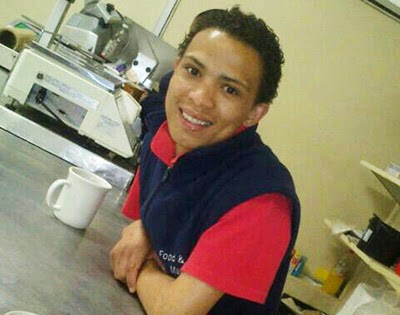 The Son daily Afrikaans newspaper reported that 21-year-old David Olyn from Ceres was killed over the weekend while a group of teens blithely watched on.
Senior Reporter Maahir Pretorius told Mambaonline that his investigation had led him to seven individuals between the ages of 14 and 16 and one of 18 years who apparently witnessed Olyn’s nightmarish death.
On Saturday evening, the youths from the Belle Vista neighborhood were drinking near a local dam when they were invited by a man to watch how he was “going to kill a moffie [fag].”
They arrived on the scene where they found the victim already covered in blood and tied up with wire.
The teens were urged to watch as the alleged attacker bashed Olyn on the head with a brick and jumped on his face while shouting in Afrikaans, “voetsek” ["fuck off"].
Throughout the ordeal, Olyn only made groaning noises, said the teenagers. The alleged killer then placed branches around the victim and set him on fire.
Shockingly, the young witnesses wandered off without telling anyone about the incident. They returned to the scene the next morning to see if Olyn was still alive.
Only then did they inform a woman about the lifeless and half-naked burnt body. She in turn called the police.
When Pretorius visited the area he met with the witnesses and was shocked by how little impact the incident appeared to have had on them.
“I spoke to those kids and they were kicking a ball around and I though that perhaps they needed help or counselling, but this was nothing new for them. They are exposed to violence on a daily basis,” he told Mambaonline.
Pretorius noted that Olyn was well known as a gay man in the area and had participated in local drag pageants. A friend described the victim as a “gentle” person and said that he did not deserve to die in that manner.
The alleged murderer was arrested on Sunday by the police.
Responding to news of the appalling crime, Johan Meyer, Health Manager at OUT LGBT Well-being, said that he was “extremely sad and shocked, to say the least, to hear of yet another senseless murder of a gay person, simply because he or she is ‘different’,” adding that “we mourn the snuffing out of another young life.”
Meyer said that the alleged killer’s words of “going to kill a moffie” indicate that the murder was clearly a hate crime. He called on the authorities to take strong action against the alleged perpetrator.

There's a sickness in Africa...it's called evangelical Christianity.
We see it venomously infecting each and every African nation one by one, as well as Europe, the Russian Federation and the USA.
Everywhere these people go, they preach hate, condone acts of violence and even call for the death of homosexuals.
These monsters need to be stopped and held accountable for their crimes against humanity!

Your are correct christianity is a blight on humanity, all religion really.

You are both wrong. It is not Christianity. Jesus would be appalled at such acts. It is Hebrew Old testament ideology. It is tribal hatred casting the first stone. It is the same masculine desire for power and domination that you flirt with in your art and pictures,only taken to the ultimate extreme of evil reality. It is without love and without consent. Do you know what you are really talking about and fighting for? Either love, forgive, and turn the other cheek like Jesus said, or SHUT THE FUCK UP and study your subject. B
P.S.Please forgive my anger.

Your making a whole lot of assumptions aren't you?
Did you even read what I said?
It clearly quantifies evangelicals being the culprits in this spread of hatred, thus making them culpable for the acts of violence their ministries poison minds with.
As for my artwork, there is a huge difference between what is forced on someone and what is given freely.
As for knowing my subject matter, I grew up in an evangelical household, spent most of my summer vacations in various Bible schools and classes learning scripture.
I think I know what Jesus said and never once blamed him for any act committed in his name.
Perhaps it is you who should shut the fuck up and learn to see what is truly there...something so many so called religious people seem to have a problem doing!