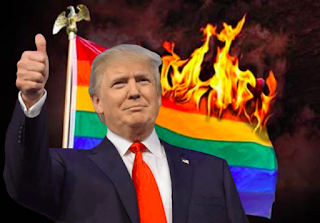 A new report from the National Coalition of Anti-Violence Programs (NCAVP) reveals 2017 was the deadliest year on record for LGBTQ people in the United States.
The organization counted 52 anti-LGBTQ homicides in all of 2017. This is an 86% increase from the violence of 2016.
In August, they released a mid-year report, showing 2017 was already deadlier than all of 2016.

The NCAVP uses the power of organization and education to end violence against the LGBTQ community.
‘We are releasing this report during a time when our communities are witnessing the few civil rights protections and policies being rolled back and discrimination being instituted into law,’ the NCAVP writes in the report.
The statistics are truly staggering.
Transgender women, cisgender men, and people of color faced the most violence. A majority of the victims (67%) were under the age of 35.
Guns were the most common means of homicide. They were used in 59% of incidents.
32% of the victims knew the offender, while another 32% died after a hook-up.

Finally, over half of the homicides occurred in just five states. New York and Texas led, following by Georgia, Louisiana, and Florida.
The NCAVP notes the violence is ‘not new, but amplified’.
In reality, the increase could be because of more incidents being reported. Alternatively, there were likely even more incidents that weren’t reported as well.
The organization also advises people call their representatives.

‘We ask that people call their representatives and ask them what they will do right now to proactively address hate violence and ensure that their communities are safe and affirming for LGBTQ people.’
Posted by Ulf Raynor at 3:50 PM