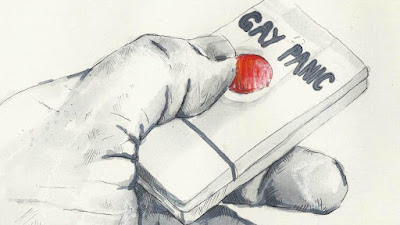 As of the 1st January, the state of Illinois begin to bar the ‘gay panic’ criminal defense. It is the second state, after California, to do so.
The ‘gay panic’ defense allows the use of the victim’s sexual orientation or gender identity as a justification for violent crimes against LGBT people.

The defense is rarely used and has typically been unsuccessful when used. But considering the rise of anti-LGBT hate crimes this year, the ban is a positive step forward.
'The gay and trans “panic” defenses are outdated relics reminiscent of a time when widespread antipathy was commonplace for LGBT individuals,’ D’Arcy Kemnitz, executive director of the National LGBT Bar Association, told USA Today. ‘It asks jurors to find that a victim’s sexual orientation or gender identity excuses the actions of a violent criminal. Our nation’s courtrooms cannot truly be places where law rules supreme while these defenses are still allowed to persist.’
‘It’s a defense that allows people to perpetuate hate crimes,’ said Monisha Harrell, Equal Rights Washington chairperson. ‘It is saying you’re surprised that somebody might be different than you, whatever that difference is, and that that would allow you to initiate violence, and in some cases, lethal violence. That should never be a defense.’
‘For us, it was important to eradicate (the defense), regardless of use,’ said Brian Johnson, CEO of Equality Illinois, which backed the ban. ‘It makes our identity sufficient reason for murder. We never wanted it to be used going forward.’
The motion to ban the defense in Illinois didn’t receive a single ‘no’ vote in either the state House or the Senate. The law was signed by Governor Bruce Rauner in August.

‘The ban sends an important message to the LGBTQ community that the state will protect them equally and the courts will not be allowed to entertain these types of defenses, which victimize victims again,’ Anthony Michael Kreis, who drafted the Illinois legislation, told the LA Times.
LGBT rights activists hope to see this ban replicated in other states this coming year. Some states that are considering similar bans are New Jersey, Massachusetts, Pennsylvania, and Rhode Island.
Posted by Ulf Raynor at 3:54 PM