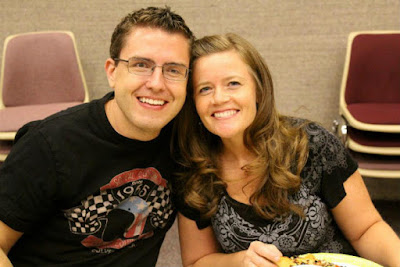 In the blog post the couple announced their divorce and apologised to the LGBT+ community.

The couple had previously said their marriage was proof that a straight woman and a gay man could marry.
“Today, we need to let you know that Lolly and I are divorcing,” the blog reads.
The couple found attention in the media after Josh announced that he was gay.

Tweeting this week, Josh wrote: “I wish we could sit down with each person who sees this and explain why Lolly and I are getting divorced. Since we cannot, this post will have to do. <3" The couple said on Thursday in the blog post that their platonic love was not the same as a romantic pairing.
Lolly added: “And that is what human beings need to be healthy. All of us. Romantic attachment. It’s one of the main purposes of life!”

Going on, Josh said the three reasons for his realisation that he wanted to divorce were his love for the LGBT+ population, love for himself as a gay man and the death of his mother.
The couple also issued an apology for various reasons to the LGBT+ community.
They wrote: “We’re sorry, so incredibly sorry, for the ways our post has been used to bully others.
And we’re sorry if our story made it easier for people in your life to reject you and your difficult path as being wrong.
“We’re sorry to any gay Mormon who received criticism, backlash, or hatred as a result of our story.
“We’re sorry to anybody who felt a measure of false peace because of our story.
“We’re sorry to any LGBTQIA person who was given false hope by our story.”
Josh added that his stance on homosexuality had changed, as it had previously been aligned with the Mormon Church
“I have spent my entire life conforming to every standard of the LDS faith because I believed it was what God wanted me to do,” he said.
“I believed this because every mentor, every exemplar, every religious teacher, every therapist, every leader I ever grew up listening to and trusting told me that that was the only way I could return to live with God. There was an emphasis on ‘perfect obedience’ and yet, over the course of my lifetime, the list of things said by these trusted leaders about my sexual orientation was profoundly inconsistent and confusing.”
Going on, Josh said that some of the “inconsistent and confusing” he had believed had included:
“My sexual orientation wasn’t real, My sexual orientation was evil, My sexual orientation was an abomination, My sexual orientation was tantamount to bestiality and just shy of murder, My sexual orientation could change in this life if I had enough faith, My sexual orientation was a “trial” to bear, My sexual orientation maybe couldn’t change in this life after all, My sexual orientation could be managed with faith, My sexual orientation could be endured.”
Lolly wrote that her friends and members of her community had empathized her and said she should be with someone who has a romantic connection with her.
“The thing that’s so interesting to me is how few people think of Josh in this way. How few people in his life have ever thought these things about him—things that are so obvious, so clear, so emphatic when talking to another straight person. I mean, isn’t the same true for LGBT people? Shouldn’t we feel the exact same intuitive injustice at the thought of them deserving to be “loved like that”?
“When the tables are turned and we are talking about LGBTQ individuals, somehow people don’t see the parallels. Why am I, as a straight person, entitled to reciprocal, requited romantic love while an LGBTQ individual is not?”
The couple added in the blog that their children would remain close to them both and that they would still love each other.
“We can continue to be the family we have always been, and we can add to that family,” they wrote.

Josh added in a statement to KUTV: “In posting, we hoped to let those who followed our story five years ago know the reality of our situation. We also wanted to apologize to the LGBTQIA community and to anybody who was hurt by our story over the last five years.”