Doug Jones With His Gay Son By His Side, Sworn Into Senate By Anti-Gay Bigot Mike Pence 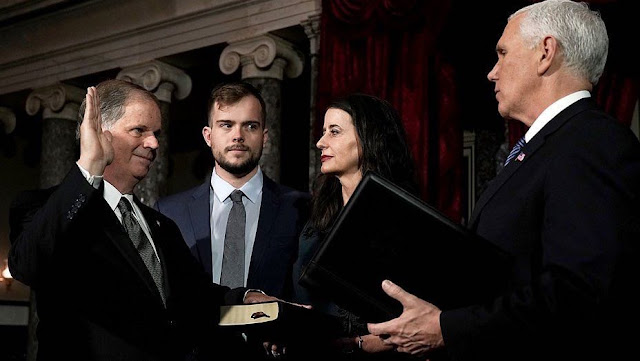 When Doug Jones beat anti-gay Roy Moore in the Alabama state senate election, his son ‘couldn’t be prouder.’
Carson Jones is his father’s biggest fan and is a vocal supporter of him on social media.

He took to Instagram to post a photo of his Democrat dad being sworn into office.
Carson captioned the photo with the hashtag: ‘We made it.’
And it’s not the first time he’s posted messages of support to his father.
On the day of the election, Carson posted this sweet photo below.
He also captioned the photo: ‘Today is the day.
‘Alabama has never had an election so important… This is not just a choice between integrity and bigotry. This is a choice between unity and division.
‘I can’t think of a time when our society needed unity more than at this very moment.’

He added: ‘History seems ripe for the making!’
After his father’s win, Carson Jones said: ‘I am obviously thrilled with my dad’s victory,’ he told the Advocate.
‘We have been overwhelmed by the support of so many people that made this happen.

‘Alabama made a really big statement that unity wins out. I couldn’t be prouder of him or my home state,’ he added.
Carson Jones describes himself as a ‘Southern gentleman’ and a zookeeper.
He’s also a ‘gym junkie, adventurer and sushi addict.’

Alabama is a traditionally conservative southern state but Doug Jones won with 49.9% of the votes.
Posted by Ulf Raynor at 12:57 PM

Boy-oh-boy, this must have really ruffled scum-bag Pence's feathers. Not only swearing in a Democrat but pro gay one as well.

The irony is mind boggling. Pence must have thrown up in his wife's purse afterwards.