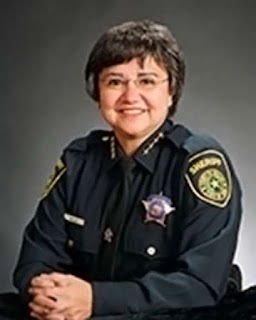 Openly gay Dallas County Sheriff Guadalupe “Lupe” Valdez announced last month that she is running for governor of Texas.
Valdez, Texas' first openly gay and first Latina sheriff, was first elected as sheriff in 2004 with a narrow margin. Last year, she received 59 percent of the vote.


"Like so many hardworking Texans, I know it’s tough deciding between buying food, finding a decent place to live, and setting aside money for college tuition," Valdez said in a statement. "Opportunity in Texas ought to be as big as this great state, but it is out of reach for far too many, that’s why I’m running for Texas Governor. I’m a proud Texas Democrat. I believe good government can make people’s lives better, and I intend to do just that."
Valdez threw her hat in the ring with five days until the candidate filing deadline for this year's Democratic primaries. She'll compete against seven candidates, including Andrew White, the son of the late Governor Mark White.
Republican Governor Greg Abbott, a vocal opponent of LGBT rights, is seeking a second term and has amassed a $40 million-plus re-election war chest.
According to The Texas Tribune, Texas has not elected a Democrat to statewide office in over two decades.
The Los Angeles Times points out that Valdez has the potential to boost party voter registration and turnout in the long-term, especially among Latino voters.
“One hope that Democrats have for Lupe Valdez is that she increases voter registration and turnout among Latinos and she shifts the percentage of the Latino vote won by Democrats from the 55% to 65% range, where it’s been recently in Texas, to the 65% to 75% range, where it’s been in places like California,” Mark Jones, a political science professor at Rice University in Houston, told the Times.
The Victory Fund, which promotes LGBT candidates for elected office, has previously endorsed Valdez.
Posted by Ulf Raynor at 11:28 AM