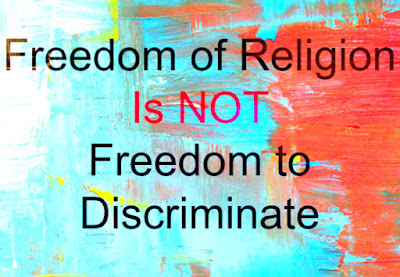 From Pink News:
Donald Trump has created “Religious Freedom Day” – and it’s a clear assault on LGBT rights.
In a presidential proclamation issued yesterday, he announced that January 16 would from now on be known as Religious Freedom Day – a move that’s sure to please the Evangelical section of his base.
He did so after breaking with Barack Obama’s eight-year tradition of issuing annual proclamations recognizing June as LGBT Pride Month.
The US is currently embroiled in a battle between so-called religious liberty and LGBT people that centers on whether homophobic Christians should have the ability to discriminate against gay people.
In this environment, he wrote: “Faith is embedded in the history, spirit, and soul of our Nation.﻿
“On Religious Freedom Day, we celebrate the many faiths that make up our country”.
This is the same President Trump who created a ban on Muslims entering the US, which rights groups called a death sentence for LGBT refugees unable to leave their countries.
Ironically, Trump emphasised that his dog whistle of a proclamation was based on the Founding Fathers’ search for “refuge from religious persecution” in America.
Just last month, his administration told the Supreme Court that it should be acceptable for businesses to put up signs denying service to same-sex couples.

Trump’s Solicitor General was supporting Jack Phillips of Colorado’s Masterpiece Cakeshop, who launched a legal challenge to the state’s anti-discrimination laws after refusing to serve a gay couple.

The baker turned away David Mullins and Charlie Craig after he found out they were getting a cake to celebrate their wedding.
Phillips has claimed that Jesus Christ would discriminate against gay people, and continues to insist his religion requires discrimination against gay people.
Now the Trump administration has further endorses Phillips’ views with a proclamation which carried a not-so-veiled threat towards LGBT people.
“Unfortunately,” the President wrote, “not all have recognised the importance of religious freedom, whether by threatening tax consequences for particular forms of religious speech, or forcing people to comply with laws that violate their core religious beliefs without sufficient justification.”
He added: “No American — whether a nun, nurse, baker, or business owner — should be forced to choose between the tenets of faith or adherence to the law.”
Note the reference to a “baker or business owner”.
While his administration continues to defend a homophobic baker, Trump told the people that “religious diversity strengthens our communities and promotes tolerance, respect, understanding, and equality”.
Tolerance and equality – except same-sex couples who want their own rights respected.
The proclamation sparked anger online, with commenter writing: “Persecuting LGBT individuals under the guise of religion isn’t an exercise of faith; it’s pure, unadulterated discrimination.”
Another person responded by saying: “Yes! And no American should have another person’s faith foisted upon them.
“Choosing no faith should also be protected.”
LGBT blogger JoeMyGod made an excellent – and funny – observation about the announcement.
He wrote: “Christians: Hooray! We’ve been protected from business discrimination since the Civil Rights Act of 1964!
“Gay Americans: Hey, can we get in on that?
“Christians: YOU WANT SPECIAL RIGHTS!!!”

I am actually pleased to read this web site posts which carries tons of valuable facts,
thanks for providing these statistics.