The Top 100 Churches In The US Are Anti-Gay 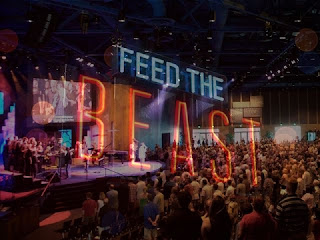 The organization looks at the teachings of individual churches, to break down a list of those that are welcoming to LGBT people and those that are not.

A further 54 have unclear policies on LGBT issues, while 11 omit all mention of the issue from publicly-accessible records.

0 of the churches were found to be affirming.
Southern Baptist megachurches were the most likely to actively preach rejection of LGBT people, with 62% found to do so.
47% of Independent Christian Churches also rejected LGBT people.
Religion News Service columnist Jonathan Merritt noted: “While progressive Christians often claim that same-sex issues have largely been settled, America’s mega-churches have apparently not received the memo.
“None of them have policies affirming same-sex people and relationships.

“This staggering statistic will doubtlessly provide firepower to conservative Christians who claim that LGBTQ+ affirmation is a slippery slope to liberalism and a congregation killer.”
Given the old-school conservatism, it is perhaps unsurprising that the largest churches were also overwhelmingly white and male.
93% of the megachurches were led by a white pastor, while 99% are led by a man.
Church Clarity’s co-founder Tim Schraeder said: “Part of the reason we chose to release this now is because the New Year is a time when people decide to reengage with religion by attending church.
“As people of faith commit to new resolutions, we wanted to set them up for success by helping them make the most informed decision.”
George Mekhail added: “We hope that increased clarity will inspire necessary questions and waves of change within the church.
“As we close out 2017, we’ll continue to verify church submissions to our database and score churches’ actively enforced policies that impact LGBTQ individuals,”
The lack of inclusion in megachurches does not mean that there are no LGBT-friendly churches, however.

Of the 537 churches that the website has published info on to date, 90 have been scored as affirming.
A popular Los Angeles megachurch pastor recently claimed that there is no such thing as gay people.
The claim came from Pastor John MacArthur of the Grace Community Church in Los Angeles, a 3,500-seat megachurch which is popular with evangelicals.
MacArthur insisted: “No one is gay. If you mean by that, that that’s some hardwiring, no one is gay.”
He elaborated: “People commit adultery, they commit sins of homosexuality, they lie, they steal, they cheat.
“It’s like saying, ‘I keep robbing banks, but I’m a robber. I’m a bank robber. What am I gonna do? I’m a bank robber.’ That is not an excuse for what you do.
“Are there certain kind of impulses that lead people in that direction? Yes. But I think one of the really deadly aspects of this is to let people define themselves as gay.

“They are not gay any more than an adulterer is hardwired to be forced by his own nature to commit adultery. Those are all behavioral sins that are condemned in scripture.
“God didn’t hardwire anybody in such a way that they are not responsible for certain behaviors.
“And so we need to cancel that out of the sin list and welcome them into the kingdom of God, because you can’t do anything else?
“But I think we do no service to people who are caught in the vicious sins of homosexuality by letting them define themselves by that sin.”
MacArthur previously advised parents of gay children to disown them and “turn them over to Satan”.

Responding to a letter from a parent whose son had just come out, he said: “If they profess to be a Christian, you have to alienate them.
“You have to separate them. You can’t condone that. It’s inconsistent with Christ.
“So you isolate them, you don’t have a meal with them, you separate yourself from them.
“You turn them over to Satan as it were as scripture says.”
Posted by Ulf Raynor at 12:29 PM