The Religion Of Peace Poised To Criminalize Homosexuality In Indonesia, Where's The Liberal Outrage? 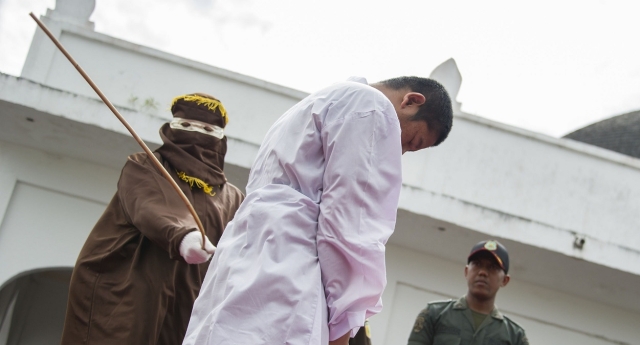 Indonesia has proposed banning gay sex – and the law could pass in the next two weeks.
The bill, which reportedly has support from all 10 of the country’s main political parties, would make gay sex punishable by up to five years in prison. ﻿


The Indonesian Supreme Court narrowly blocked a similar measure from passing last month, but it seems that was only a temporary reprieve.
The bill could pass as soon as Valentine’s Day, according to Kate Walton, an LGBT activist in the Indonesian capital, Jakarta, who was speaking to ABC in Australia.
Arsul Sani, the secretary general of the PPP Party, helped to create the new criminal code.
He said: “It applies to people of the same gender who have sex, which is basically a forbidden act.
“It’s considered the same as adultery, where men and women having sex outside marriage can be considered a crime.”

The news comes just days after Indonesian police arrested 12 transgender women in Aceh and shaved their heads in an effort “to turn them into men”.
Aceh is the only part of the Muslim-majority country where gay sex is already illegal, as the region has Shariah law, having won this concession from the government as part of a 2005 autonomy deal.
The raid on salons was called “operasi penyakit masyarakat,” which translates as “community sickness operation”.
The police chief in Aceh said his officers also humiliated the trans women “by way of having them run for some time and telling them to chant loudly until their male voices came out.”
Gay hook-up apps have also been pulled from the Google Play Store in Indonesia amid a government crackdown on the LGBT community.
Andreas Harsono of Human Rights Watch said the new law “will create new discriminatory offences that do not exist in the current criminal code.
“It will slow down Indonesia’s efforts to develop their economy, society, knowledge and education … if law enforcement agencies are busy policing morality.
“It’s sounding like the Acehnese sharia code,” he added, according to Reuters.
In May, two men were caned 83 times in Aceh as a legal punishment for having gay sex.
The 20 and 23-year-old, identified only by their initials – MH and MT – were the first to be sentenced to punishment for gay sex in the region.
The father of one of the men, who requested anonymity, said that he was unaware that his son was not straight before he was arrested.
“This is an ordeal for our family,” the father said.
“After this problem is resolved, we will send him to an Islamic boarding school to be educated so he won’t be deviant anymore.”
Amnesty International has repeatedly urged Indonesia to stop its horrific treatment of LGBT people in Aceh
A report alleged that there had been attempts to ‘cover up’ the anti-LGBT oppression in the region by moving the floggings away from the public eye.
But it’s not just in Aceh where LGBT Indonesians suffer..
The caning punishment came the day after 141 men were arrested in Jakarta, the capital, for having a “gay sex party”.
And earlier that same month, eight men were arrested for holding a “gay party” in Surabaya, the second biggest city in Indonesia.
It was also announced that the country’s government would clamp down on gay culture – instituting a ban on online “gay propaganda” after a request from the police.
Last year, Indonesian lawmakers gave the green light to a proposed law that would outlaw ‘LGBT behaviors’ on television.