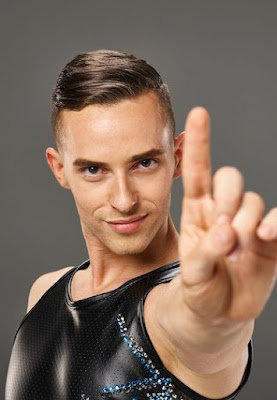 Figure skater Adam Rippon is the first openly gay man to compete for the United States in the Winter Olympics.
The 28-year-old will join Nathan Chen and Vincent Zhou in PyeongChang, South Korea next month.

Rippon, who was the US national champion in 2016, will be making his Olympic debut.
‘I don’t really care what other people think of me. I’m able to go out there and I’m really able to be unabashedly myself,’ he said, according to the Washington Post.
‘I want somebody who’s young, who’s struggling, who’s not sure if it’s OK if they are themselves to know that it’s OK.’

The US has never sent an openly gay man to the Winter Olympics. While Johnny Weir faced speculation over his sexuality, he did not come out until he finished competing in 2011.
Gus Kenworthy, a freestyle skier, may join Rippon to compete. He will find out later this month.
And a third gay athlete, luger John Fennell, had hoped to be in Team USA. However, a sled malfunction cut his chances and he finished in 21st in the qualifying heats.

For Rippon, he is taking being gay and an Olympian with little to no stress.
He previously said: ‘Being gay isn’t what defines me, but it’s a big part of who I am and I like to talk about my coming out because that’s when I started to own who I was as a person.
‘That’s what’s important, not the being gay part but at some point — gay or straight — you need to own who you are. You can’t be afraid of who you are or else you’re afraid of your own potential, and if you don’t own who you are then you can’t grow.
‘When I came out was when I was able to breathe. When everyone knew, I didn’t feel like I was hiding anything. I didn’t feel like I was putting on a show. I was being me and it was easy. It was a lot easier to be me than to be who I thought I was supposed to be.’
But then he doesn’t see that much difference between competing as a gay or straight athlete.
‘A few weeks ago, I was asked in an interview … what was it like being a gay athlete in sports,’ he said.

‘And I said it’s exactly like being a straight athlete. Only with better eyebrows.’
Posted by Ulf Raynor at 2:38 PM