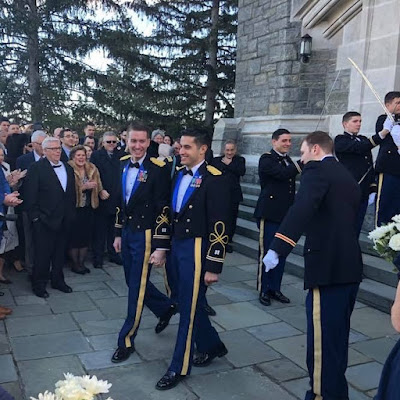 Two US army captains who met during ‘don’t ask, don’t tell’ have become the first active-duty gay couple to get married at a famous military academy.
The wedding significantly took place in the glorious surroundings of the United States Military Academy West Point.

Capt. Daniel Hall, 30, and Capt. Vinny Franchino, 26 exchanged vows this weekend at the estate’s picturesque chapel, the New York Times reports.
The pair are Apache helicopter pilots. They met in 2009 when Hall was a senior and Franchino was a freshman.
It was at a time the former President Bill Clinton’s policy ‘don’t ask, don’t tell’ was still in effect.

It stopped gay or bisexual members of the military from serving openly.
'We couldn’t tell the truth for fear of what would happen to us,’ Franchino told The New York Times.
‘So we put it in our minds that we were never going to say we were gay.

‘We were never going to get made fun of, and we were certainly never going to get kicked out of the Army.’
But even after Congress repealed ‘don’t ask, don’t tell’ in September 2011 – it wasn’t an easy ride for the pair.
‘That’s where some guy called us both faggots,’ Franchino told The Times.

Though they had their first date in 2012, they were split up by a deployment. Hall was sent to South Korea with his Boeing AH-64 Apache attack helicopter. There he began dating other people.
However, the duo eventually got back together. And now dressed in their blue formal uniforms they have finally tied the knot.
Franchino said that although he’s been through a lot with his new husband, nothing was worse than when he had to hide his identity.

‘We’ve experienced everything from people feeling awkward around us to being called faggots while holding hands and walking down the street, stuff like that. But despite what we’ve been through, nothing was worse than having served during the ‘don’t ask, don’t tell’ years.’

Congrats Dan & Vinny!
Over here ... over there ...
Now in the open everywhere ...
And TheArmy Goes Rollin' Along !

Excuse me but how old was the younger one when they had their first date in 2012? And how old was he in 2009 when they first met? Someone screwed up this timeline or their ages.