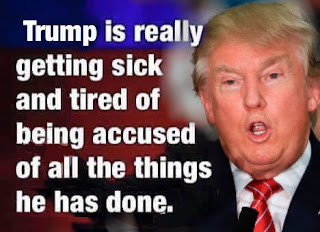 He won the Overall Achievement in Undermining Global Press Freedom.
As the CPJ outlines, ‘the United States, with its First Amendment protection for a free press, has long stood as a beacon for independent media around the world’.
However, they assert Trump stands in contrast to former presidents.
‘Under Trump’s administration, the Department of Justice has failed to commit to guidelines intended to protect journalists’ sources, and the State Department has proposed to cut funding for international organizations that help buttress international norms in support of free expression.’
The organization further named Trump runner-up for Most Thin-Skinned after Turkey’s President Recep Tayyip Erdoğan.

In describing Trump, the CPJ writes: ‘He regularly attacks outlets and individual journalists on Twitter and in speeches, calling them “sad,” “failing,” or “garbage.” Since declaring his presidential candidacy in 2015, Trump has posted about 1,000 tweets critical of the press.’
The CPJ’s honors come not long after Trump announced his own ‘awards’ on Twitter.
‘I will be announcing THE MOST DISHONEST & CORRUPT MEDIA AWARDS OF THE YEAR,’ he tweeted forecefully. ‘Subjects will cover Dishonesty & Bad Reporting in various categories from the Fake News Media. Stay tuned!’
A lack of dedication to press freedom harms all vulnerable groups.
Previously, the White House has denied numerous press reports and journalists’ work regarding Trump’s comments on the LGBTI community.
The New Yorker stood by a report, which revealed Trump once joked that Mike Pence wanted to ‘hang all the gays’.
In November, Trump re-tweeted Islamophobic videos from a British nationalist group. At least one was proven to be fake and misleading.

The White House also denied Trump made comments about Haitians having AIDS, though the New York Times stood by it.
Posted by Ulf Raynor at 1:00 PM

just impeach him already or throw him in the looney bin.