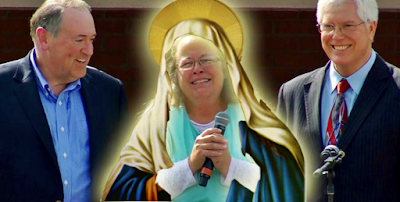 Kim Davis on Tuesday (15 September) lost yet another bid to delay her office from issuing gay marriage licenses.
A day after the Kentucky clerk returned to work, the US Court of Appeals for the Sixth Circuit reiterated that ‘Davis has not demonstrated a substantial likelihood of success on her federal constitutional claims.’
She spent five days in jail last week for contempt after she defied a Supreme Court order to issue gay marriage licenses because of her ‘sincerely-held religious beliefs.’
The latest ruling was in a countersuit against Governor Steve Beshear, who ordered Davis comply with the US Supreme Court ruling that legalized gay marriage nationwide and who she claims is partly responsible for her present troubles.
One of her deputies started issuing licenses to gay couples while she was away. When she returned on Monday, Davis said she would not block her deputies from issuing licenses, but ordered her name be removed from the templates and replaced with ‘pursuant to federal court order.’
Davis has one more request for reprieve before the appeals court, which argues that the order she was jailed for defying should only apply only to the four gay couples who sued her and no others.
The American Civil Liberties Union (ACLU), who represented the couples, asked the court to reject ‘Davis’ latest attempt to avoid the obligations of her office.’
‘She keeps asking the same question and getting the same answer from the courts – that she has to do her job.’ said James Esseks, director of ACLU’s Lesbian, Gay, Bisexual and Transgender Project.

‘Issuing marriage licenses doesn’t mean she approves of those marriages, it just means she’s doing
the job she was elected to do.’

Must suck not being able to joyfully spread her message of hate and intolerance by denying more homo's equality.
That's okay Kim, maybe you should use your new found popularity and sainthood to run for President.