Who Does He Think He's Fooling? 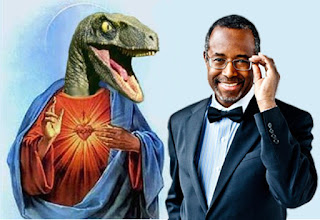 From Pink News:
Former Fox pundit and neurosurgeon Dr Ben Carson is one of a vast number of Republicans currently in the running for his party’s Presidential nod, and is a strong opponent of LGBT rights.
He said earlier this year that prisons prove being gay is “absolutely” a choice, and has compared homosexuality to bestiality and pedophilia
Dr Carson also believes that same-sex marriage is a Marxist plot, and claimed that he doesn’t believe gay rights are civil rights.
But bewilderingly, the Presidential candidate now says that you aren’t suitable to be President if you are a Muslim, because of Islamic teachings about gay people.
Dr Carson wrote in a Facebook post: “I could never support a candidate for President of the United States that was Muslim and had not renounced the central tenant of Islam: Sharia Law.
“Under Islamic Law, homosexuals – men and women alike – must be killed. Women must be subservient. And people following other religions must be killed.
“I know that there are many peaceful Muslims who do not adhere to these beliefs. But until these tenants are fully renounced…I cannot advocate any Muslim candidate for President.”
He did not specify why his own overtly anti-LGBT comments make him suitable for being President.
In a speech to the anti-gay National Organization for Marriage’s gala just a year ago, Carson ranted about same-sex marriage being a front for communism.
He said: “If you look in a lot of writings of the Neo-Marxists when they talk about the New World Order, they say there’s only one stick in the mud: how do you get them out of the way and how do you change them?
“They said there were two things: their Judeo-Christian faith, and their strong families. Those were the things that had to be attacked, and those things have been systematically attacked.
“There’s a book called the Naked Communist… it lays out the whole agenda of how to attack the family and the Judeo-Christian values, to weaken the structure of America.
“This stuff is not secret, you can read about it. You can see all the things that are happening in America today.”
He has also ‘joked’ about poisoning gay wedding cakes.
Posted by Ulf Raynor at 6:10 PM

yeah and being black is a choice