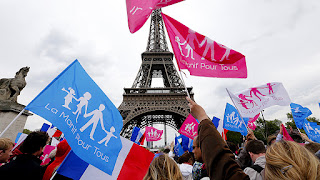 A new poll released in France has revealed 56% of French people are against gay marriage.
Two years ago French president François Hollande ushered in the electoral promises he made, which included legalizing gay marriage.
However, according to a survey from IFOP – the French institute of public opinion, similar to YouGov or Gallup – a majority say they still don’t agree with the new laws.
In fact, 22% want ‘outright repeal of the law’; 32 percent say they want marriage for same sex couples to be ‘civil unions… without full rights to adoption.’
The poll was first published by the right-wing French weekly Valeurs Actuelles (‘Contemporary Values’).
Italian magazine Tempi (‘Times’) notes, however, this is an improvement. ‘During the discussion of the law [in 2013], the percentage was 37%. So it’s greater now.’

The law, so-called ‘loi Taubira’ after Holland’s minister of justice in 2013, grants same sex couples the opportunity to marry, full adoption rights, as well as for children conceived by a surrogate mother or through artificial insemination.
Posted by Ulf Raynor at 6:07 PM

I hope you're doing fine!
This poll does not say the truth. They voluntarily mixed up the topic about same-sex marriage and the one about surrogate mothers (largely disapproved in the country at the moment).The majority of the people in France favour same-sex marriage. Besides "Valeurs actuelles" is a far-right tabloid. It is true though that if the right comes back to power in 2017 election, there will some backslash to be expected one way or another.
Greetings !

Thanx my friend for letting us know, often what is reported by the news media has a slant one way or another.
Hope you and your husband are doing well!