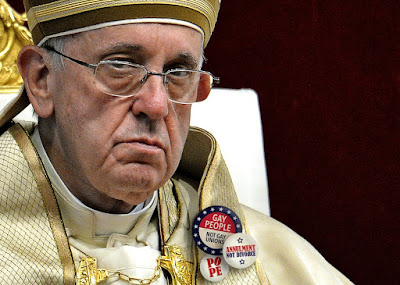 Pope Francis did not say the words ‘same-sex marriage’ during his historic address before the US Congress on Thursday (24 September) but seemed to subtly be expressing his disapproval of what is now legal in all 50 states.
The head of the Catholic Church has been widely seen as more progressive than his predecessors but on such social issues as same-sex marriage and abortion, his stance remains firm
‘How essential the family has been to the building of this country!,’ the Pope said, ‘And how worthy it remains of our support and encouragement!
‘Yet I cannot hide my concern for the family, which is threatened, perhaps as never before, from within and without. Fundamental relationships are being called into question, as is the very basis of marriage and the family. I can only reiterate the importance and, above all, the richness and the beauty of family life.’

There has been hope among LGBT organizations that the Pope would address such issues as same-sex marriage and discrimination against LGBT Catholics within the church.
Posted by Ulf Raynor at 4:52 PM