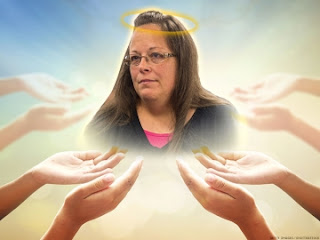 A lawyer for a Rowan County deputy clerk filed a notice in court yesterday (18 September) stating the embattled county clerk is changing certificates, going against the order of US District Judge David Bunning.
‘Those changes were made in some attempt to circumvent the court’s orders and may have raised to the level of interference against the court’s orders,’ wrote Richard Hughes, according to NBC News.
Hughes is the attorney for Brian Mason, a deputy county clerk who has issued marriage licenses under the judge’s order.
According to Hughes the changes include the removal of Davis’ name, any mention of Rowan County, or references to deputy clerks. Mason name is on the form, but not his title.
‘Mr. Mason’s concern is he does not want to be the party that is issuing invalid marriage licenses and he is trying to follow the court’s mandate as well as his superior ordering him to issue only these changed forms,’ Hughes said to NBC.
Davis lawyer, Mat Staver, sees no problem.
‘Kim Davis said Monday that her name and title would not appear on the forms and later that same day the Governor said the forms were valid,’ Staver said. ‘And Judge Bunning’s order releasing Kim Davis said a form altered by Brian the day after the contempt hearing while Kim was in jail was valid. So there is no new development.’
Since the US Supreme Court ruled marriage equality is legal in all 50 states, the Rowan County employee has refused to issue marriage certificates, citing her religious faith. Last month, Bunning ordered her to follow the law. The Democrat appealed to the Supreme Court, but the highest court in the country denied her emergency request to not issue certificates to any couples.

She continued to ignore the judge’s ruling. Bunning placed her in jail, for contempt, earlier this month. After five days she was released on 8 September, but warned not to interfere with issuing of marriage certificates.
As of today, 19 September, she’s found no success in courtrooms. In fact, this week she lost two of her appeals. One was a countersuit against Governor Steve Beshear, who ordered Davis comply with the Supreme Court and who she claims is partly responsible for her present troubles.

The second loss was yesterday’s ruling from the Court of Appeals for the 6th Circuit, denying her her request for a stay on injunction ordering that she issue marriage licenses to all gay couples – not just the four that sued her.
Posted by Ulf Raynor at 3:03 PM

When will the circus with this bitch be over?? Enough with putting up with her bullshit. Fire her ass, and if that's not possible stop paying her for not doing the job she was hired to do. She's like the poster child for dysfunctional marriages. Married 4 repeat 4 times. What a fucking joke.

^Agreed. Hope she ends up back in prison, left there until she either quits, gets fired, or STARTS doing her job.