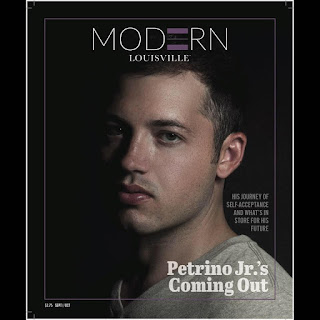 The son of famous football coach Bobby Petrino has come out as gay on the cover of the new gay
magazine, Modern Louisville (image below).
In a story that will resonate with many, the Idaho-born Bobby granted the publication a no holds barred interview, admitting he dated girls in high school, adding: ‘I hung out with only guys. I was very much a bro or jock in high school.’
He continued: ‘I was trying to make myself straight. I thought I could, in a way, conquer it. Like, not be gay. Obviously that’s impossible to do but I tried.’
The brave 25-year-old also described the moment he decided to come out to a friend, saying: ‘One night I got to the point where I as like “I can’t live like this. Either I’m going to accept this or I’m going to kill myself.”‘
The former athlete also relives his first gay sexual experience to the mag, before describing the arduous process of coming out to his family a few years ago, including his famous dad.
‘He gave me a really big hug and told me he loved me no matter what. He’s never treated me any different,’ he says.
Bobby’s father is currently the head coach at the University of Louisville.