The People You See When You Forget Your Gun 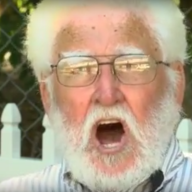 Eugene Holmes, a mayoral candidate for the Charlotte, North Carolina suburb of Kings Mountain, says that he would model his administration after Kentucky clerk Kim Davis.
Davis, the elected clerk of Rowan County, has cited her religious faith in refusing to issue marriage licenses to gay and lesbian couples. A federal judge jailed her for five days for refusing to comply with his ruling ordering her to issue marriage licenses to all qualified couples.


“In my administration I would do just like Mrs. David did in Kentucky,” Holmes told the Kings Mountain Herald. “If you elect me, I'll uphold the law of the state of North Carolina. I would get the D.A. to swear out a warrant on any man who says he's gay.”
He incorrectly added: “Sodomy is a crime. A felony in the state of North Carolina.”
A member of the Church of God and the Promise Keepers, Holmes endorsed “eradicating” gays.
“What's wrong with eradicating homosexuals? We should jail them. Throw them all in jail,” he said.
According to the Shelby Star, Holmes was arrested last year for disorderly conduct for shouting “inflammatory and degrading remarks about homosexuals” outside the Family Worship Center church in Kings Mountain and he served five years in prison for a felony larceny conviction.
Posted by Ulf Raynor at 3:33 PM