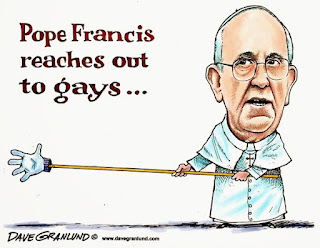 Pope Francis has backed government officials who wish to refuse marriage licenses to gay people.
The leader of the Catholic Church has returned home from a 10-day trip to the United States and Cuba, finishing the trip by answering reporters’ questions on his trip and major issues.
He was asked if he supported individuals, including government officials, who had gone against the law of the land to deny same-sex couples marriage licenses on the basis of their ‘religious freedom’.
This was in reference to Kentucky’s Kim Davis who was jailed after she refused to issue a marriage license to a gay couple.
‘Conscientious objection must enter into every judicial structure because it is a right,’ Francis told reporters, according to Reuters.
‘I can’t have in mind all cases that can exist about conscientious objection but, yes, I can say that conscientious objection is a right that is a part of every human right.’
He added: ‘And if someone does not allow others to be a conscientious objector, he denies a right.’

Conscientious objection had to be respected in legal structures, according to Francis: ‘Otherwise we would end up in a situation where we select what is a right, saying: “This right has merit, this one does not.”

so gays are `conscientious objectors` to Leviticus?