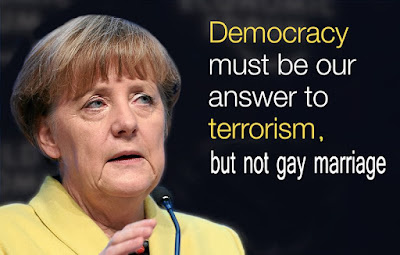 From Pink News:
Chancellor Merkel has repeatedly ruled out calls to introduce equal marriage, saying: “For me, marriage is a man and a woman living together.”
However, in a challenge to her government, the upper house of the German Parliament has today passed another call for equality – after setting up to do so in June this year.
Unlike the Bundestag (main chamber of the Germany Parliament), where Chancellor Merkel’s Grand Coalition holds control, the Bundesrat (equivalent to the Upper House/Senate) is controlled by the 16 state governments, with a current left-wing majority.
A coalition of the Social Democrats, the Greens and the Left this week backed a bill in the Bundesrat that would recognize unions between same-sex couples, despite Chancellor Merkel’s insistence it is between a man and a woman.
However, it is unlikely to make any real difference – as legislation on the issue is unlikely to pass the Bundestag without the government’s blessing
Germany allows same-sex couples to enter into registered life partnerships that provide some of the benefits of marriage – but the Chancellor’s CDU/CSU coalition continues to oppose same-sex marriage.
Of the 631 seats in the Bundestag, Merkel’s Grand Coalition holds 503 seats. Though the Social Democrats, part of the governing coalition, holds 193 seats, it is bound by the coalition agreement.
Posted by Ulf Raynor at 8:09 PM