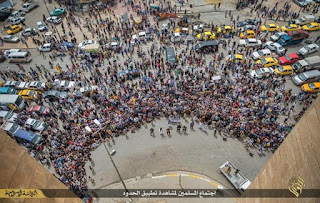 Islamic State militants executed nine men and a boy accused of being gay in Syria on Monday (21 September), a monitoring group has said.
The UK-based Syrian Observatory for Human Rights said the jihadists shot dead seven men in Rastan, a town in central Syria, ‘after accusing them of being homosexual.’
Two men and a boy – his age is not known – were also executed in the northern town of Hreitan for the same reason, Observatory head Rami Abdel Rahman told AFP.
He said the executions were carried out in public but IS fighters destroyed any cameras that had been used to film the killings.
ISIS has branded LGBT people ‘the worst of all creatures’ and claimed responsibility for the executions at least 30 gay men.
Last month, the United Nations Security Council heard from two gay men who had fled the terror group.
‘ISIS are also professional when it comes to tracking gay people,’ said one of the survivors.

‘They hunt them down one by one. When they capture people, they go through his phone and his contacts and Facebook friends. They are trying to track down every gay man. And it’s like dominoes. If one goes, the others will be taken down too.’

Of course, the UN responded by making Saudi Arabia the head of human rights.
Islam, like all the other Abrahamic religions, is patriarchal, misogynistic, homophobic and nihilistic.
All these religions want, is to see the world end.

it's got nothing to do with religion of course, and who cares if it has. It's simply the age-old problem of youths with guns and bombs. And loving it