Will There Be An Elton/Putin Detente On LGBT Issues? 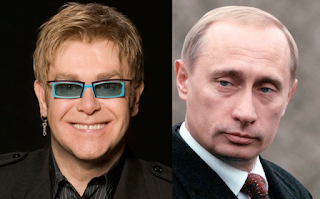 Just yesterday, Sir Elton John – who has a large following in Russia – called for President Putin to meet with him to discuss his country’s anti-gay laws.
The veteran singer, who has two sons with his husband David Furnish, spoke out after meeting with the President of neighbouring Ukraine, Petro Poroshenko, to discuss LGBT rights.
Speaking to the BBC, he cited about Putin’s ignorant comments ahead of last year’s Sochi Winter Olympics, when he claimed that gay people would be let in as long as they “leave the children in peace”.
Sir Elton said: “I’d probably not [change his mind], but I’ll have a go! I’d love to meet him, I’d love to sit down with him and talk to him.
“It’s probably pie in the sky… but if I meet him and say ‘let’s have a cup of tea and talk about this’, he may laugh behind my back when he shuts the door, and call me an absolute idiot, but at least I can think I have the conscience to say I tried.”
However, surprisingly Vladimir Putin actually did give Sir Elton a call today – and the pair are thought to have discussed Russia’s laws.
The Rocket Man singer wrote on his Instagram: “Thank-you to President Vladimir Putin for reaching out and speaking via telephone with me today.”
Surprisingly he appeared to suggest an in-person meeting had already been scheduled, saying: “I look to forward to meeting with you face-to-face to discuss LGBT equality in Russia.”
Explaining what he would say to Putin previously, Sir Elton said: “I’d say come on – gay people are not the problem here. They are not the problem of the world, the world faces much bigger problems than gay people. Don’t isolate and be prejudiced against gay people.”
The singer also spoke about his fans in the country, for whom he regularly performs despite the country’s anti-gay laws.
He said: “I like the Russians. When I went there in 1979, I was astonished how friendly and kind and lovely they were, and that’s probably the only power I have – to use my fame and fortune to bring people together through music, and to then try and use the message of peace and acceptance and inclusion afterwards in my older age.
“I probably wouldn’t have done this when I was 40 or 50, because I wasn’t mature enough to do it.”
Posted by Ulf Raynor at 6:57 PM