Despite Fake Christian Dog And Pony Show, Kim Davis Caves In And Agrees To Let Staff Issue Marriage Licenses To Gay Couples And Is Released From Jail 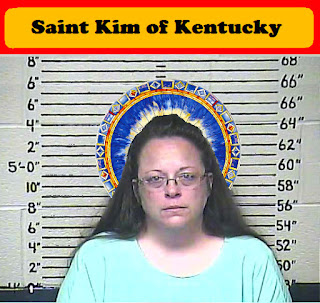 US District Judge David L Branning issued an order today granting her a conditional release – as long as she does not “interfere” in the process by blocking same-sex marriage licenses.
The judge ruled: “Defendant Davis shall be released from the custody of the US Marshal forthwith.
“Defendant Davis shall not interfere in any way, directly or indirectly, with the efforts of her deputy clerks to issue marriage licenses to all legally eligible couples.
“If Defendant Davis should interfere in any way with their issuance, that will be considered a violation of this Order and appropriate sanctions will be considered.”
The ruling continues by imposing conditions on the deputies who have begun to issue marriage licenses to same-sex couples in the time Davis was jailed.
It further states: “CJA counsel for the five deputy clerks who indicated they would comply with the Court’s Order shall file a Status Report every fourteen days from the date of entry of this Order.

“Within those reports Counsel shall report on their clients’ respective compliance with the Court’s August 12 2015 Order enjoining the Rowan County Clerk from enforcing her “no marriage licenses” policy, as well as its Order of September 3 2015 requiring them to issue marriage licenses to all eligible couples in compliance with the Court’s prior Order.”
Posted by Ulf Raynor at 5:52 PM