Who Knew...Kim Davis Did Have A Gay Friend 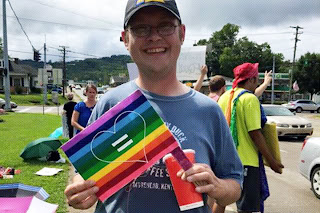 Davis, who has been married four times but insists God doesn’t want gays to marry, claimed in a TV interview earlier this week that she still has gay friends.
The cause was taken up by investigative reporters across the US – and sleuths from the Daily Beast did in fact manage to track down a gay man who admitted a friendship with Davis.

However, there’s a catch. Kim’s GBF, Dallas Black of Morehead, Kentucky, says he barely recognizes Davis given her current viewpoints.
He explained: “Even after this all started, I went in a few days later and we spoke.
“We talked about how each other were feeling, and how we’re gonna be friends even after all this.”
He added: “I really don’t know who Kim is at the moment. I really want to believe that the kind, sweet person who was there when my mum passed away is still there.
“I was friends with Kim in the past, but I don’t know this woman I’ve been seeing.”
Mr Black also revealed that Davis only became a Christian recently, despite her proselytizing.
He said: “I somewhat feel like she is taking this to an extreme, because she didn’t become a Christian until four years ago.
“Kim Davis has become the face of Morehead, and that’s not the face we want to portray.”
“This is kind of like a sanctuary for people who came to [Morehead State University]. They live here now, they’ve made it their home because it’s so progressive,” he said. “And now it’s like, what is this place we live in? This is not the home we know. We don’t feel safe now. That’s ultimately what she did. She made us feel like our home was invaded by strangers, and she made us strangers to it.”
He added that Davis wouldn’t be on his wedding guest list.
Posted by Ulf Raynor at 5:39 PM