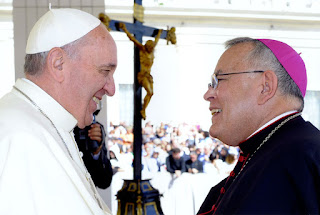 Catholics who are gay and have sex cannot receive Holy Communion in the Archdiocese of Philadelphia, according to Archbishop Charles J. Chaput.

Chaput has issued a new set of pastoral guidelines that also rules out communion for Catholics who are divorced and civilly remarried as well as unmarried couples who live together.

The archbishop acknowledges that it is ‘hard teaching.’

Gays, remarried divorcees and cohabiting unmarried couples are also not allowed to serve on parish councils, instruct the faithful, serve as lectors, or dispense Communion, the Philadelphia Inquirer reports.

Chaput describes these as ‘irregular’ relationships and writes that ‘no matter how sincere’ they may be, to allow any of these people to have positions of responsibility in the church would ‘offer a serious counter-witness to Catholic belief, which can only produce moral confusion in the community.’

He was part of the group of bishops who advised the Pope on the document and is chairman of a five-bishop committee to help promote the teachings of it in the US.
Posted by Ulf Raynor at 5:20 PM

I'm from Philadelphia and this guy sucks--the phantom priest/archbishop. He is so regressive and non-inclusive that he basically flouts the Pope's view on the church being more inclusive and compassionate. There is nothing inclusive about his document and if you but knew the number of churches he has shut down or consolidated forcing many parishioners to travel very far if they want to worship or give up going to church regularly because they are poor and lack transportation or public transportation on Sunday's is not dependable or timely or they are elderly/infirm and unable to walk long distances you would be amazed. THere are thousands of disenfranchised and unsung Catholics in Philadelphia. But they still send you the monthly stack of envelopes for weekly offerings and extra envelopes even if you never go to mass at the parish where you have been redirected. This HR (human resource) archbishop has alienated thousands of Philadelphia Catholics by his manner, actions and general aloofness unless a camera crew is filming. In other words because the church is so riddled with debt from losing court cases and paying settlement fees for the pedophile priests they have to shut down churches and schools-- in this city at least. They are even selling off St. Charles Brommeo Seminary where the Pope stayed when he visited Philadelphia. Chaput is a wrecking ball. Thank you for taking the time to read this--Oh by the way -they also sold over the management of Catholic cemeteries and the fees are ridiculous. The Catholic church is fiscally irresponsible and mismanaged and it starts in Vatican city.