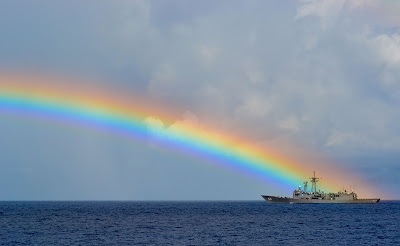 Conner Curnick wasn’t planning on coming out to his fellow sailors in April 2015.

But a photo on his very active Instagram account had pretty much taken that step for him.

Curnick had posted a photo of himself and another guy on the same motorcycle and his buddies at the US Naval Base in Pensacola, Florida, wanted answers.

‘Explain this,’ said one message on Instagram. Another was even more to the point: “Curnick, are you gay? Don’t lie to us.’

‘Their messages wanted to know the truth. I realized my biggest fear had come to fruition,’ Curnick writes in a column for Outsports.

Curnick, a Petty Officer Third Class, was alone at the time and in tears. He decided to come clean and told them: ‘Yes, I’m gay.’

‘The reactions started coming in and, to my relief and surprise, they were overwhelmingly positive,’ he writes.

‘While I did lose a few friends, the ones closest to me became even closer, because I no longer had to lie about who I was and for the first time they knew what was really going on in my life.’

But not everyone in the military has been supportive since Curnick began to live openly more than a year ago.

‘This past spring, in combat training before my deployment to Afghanistan, someone found out I was gay, walked up to me and said, “I’m glad I’m not deploying with you, I wouldn’t trust a fag with my life.” This despite the fact I was one of the better marksmen and performers in my class.’

Curnick refused to let it get him down: ‘I use comments like that to fuel my fire to succeed in everything that I do.’

Curnick is currently working with fellow LGBTI sailors to start an organization at their base promote understanding and ensure equality in the workplace..

He has been to the Middle East twice and been awarded accolades for his achievements including letters of accommodation from leaders at Combatant Commands. He has also won Sailor of the Quarter at his command of 2,300 Sailors.’

‘Since coming out, I have become a much happier, productive and successful person.’
Posted by Ulf Raynor at 4:55 PM