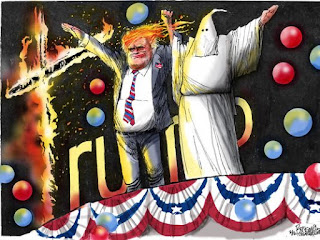 But the extremist hate preacher, who has been an outcast from most of civilized society for years, has apparently been so inspired by the rise of Donald Trump that he’s running for Congress too.
In a video, he lavished praise on Trump for allegedly adopting many of the same issues that Duke believes in, and said it had encouraged him to launch his own bid for power.
He said: “I’m proud to announce my candidacy for the United States Senate. I believe in equal rights for all and respect for all Americans.
Thousands of special interest groups stand up for the interests of African-Americans, Mexican Americans, Jewish Americans. European Americans need someone in the US Senate who will defend their rights and heritage.”

He cited many of Trump’s key policies including abolishing trade agreements.
“The New York Times admitted that my platform became the GOP mainstream and propelled Republicans to control of Congress.
“I’m overjoyed to see Donald Trump and most Americans embrace most of the issues that I’ve championed for years.
“My slogan remains ‘America First’. Equal rights for all, special interests for none.”
In a radio broadcast, he added: “I love what Trump’s doing. I think that Trump is a breath of fresh air. I don’t know exactly what he’s going to do when he’s in but I think it’s great what he’s doing.
“I’m going to vote for Trump, I said I supported Trump, I’ve been aligned with Trump from very early in this campaign.
“But we need at least one guy in the United States Congress, whether in the House of Representatives or the Senate, at least one guy that will openly stand up for the rights and the heritage of European-Americans and I believe that the time is right.”
Posted by Ulf Raynor at 6:33 PM

It's like Hitler and Goering all over again--all minorities and ethnicities are in potential danger if Donald Trump or this other horror get elected to public office. Those who do not learn from history are doomed to repeat it.