The Cost Of Bigotry 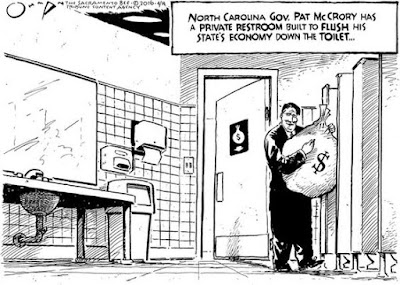 North Carolina governor Pat McCrory is courting controversy again, after his office took $500,000 out of a disaster relief fund to sponsor his lawsuit over HB2 with the Department of Justice.

McCrory started the lawsuit after the Department demanded he repeal his HB2.

The infamous bill diminishes workplace protections for LGBT people. It also insists transgender people use the bathroom according with their birth certificate gender, hence the nickname ‘bathroom bill’.

On Friday it was announced the bill, passed in March, would not be especially amended. Workers may still use state law to sue employers over discrimination.

However, the General Assembly adjourned without incorporating new protections for LBGTI employees – as hoped for by activists – or revising the bill.

The governor didn’t back down from the legal battle. It has been termed McCrory vs. United States.

The decision to take money out of the disaster relief fund may prove poorly timed, given the looming threat of the Zika virus.

The virus has been described as an epidemic in Brazil. There have been 12 cases in North Carolina as of the beginning of June.

But the cost of HB2 to the state will be higher than what has been taken from the relief fund.
Posted by Ulf Raynor at 9:43 PM