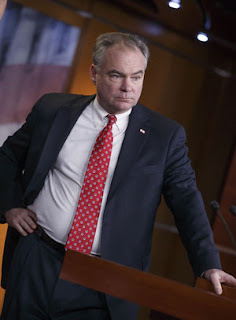 From Pink News:
Senator Tim Kaine, who was named as the former Secretary of State’s running mate, has been a vocal supporter of LGBT rights across his time as Governor of Virginia and in the Senate.
One of Kaine’s first actions as Governor in 2006 was to sign an executive order adding sexual orientation protections to the non-discrimination policy for state workers.
Kaine came out in favor of equal marriage before President Obama did in 2013, signed a Supreme Court brief calling for nationwide marriage equality, and is a sponsor of the Equality Act – proposed legislation that would introduce LGBT anti-discrimination protections across all 50 states.
His views contrast with Donald Trump’s VP pick Mike Pence, a diehard opponent of LGBT rights who previously signed a ‘religious freedom’ law permitting anti-LGBT discrimination.

Equality California Executive Director Rick Zbur said: “With her selection of Sen. Tim Kaine, Hillary Clinton has highlighted the stark differences between her ticket and her opponent’s. In contrast to the extremes of racism, xenophobia, misogyny, and homo- and transphobia on display this week at the Republican National Convention, Kaine presents an alternative: a pragmatist who works across ideologies and across the aisle to get things done.
“As governor of Virginia, Kaine partnered with the state’s Republican legislators and attorney general to strengthen background checks on gun purchases. Vice President Joe Biden hailed the legislation as a potential model for a federal bill.
“After exhibiting the same ‘evolution’ on LGBT issues as the nation as a whole, Kaine is now solidly pro-LGBT equality. As governor, he issued an executive order banning discrimination against lesbian and gay state employees and campaigned against a ballot measure barring same-sex couples from marrying. He has spoken out strongly in favor of marriage equality and adoption by same-sex couples, receiving a 90 percent rating from the Human Rights Campaign.
“Donald Trump’s feigned concern in his speech for the perils LGBT people face abroad ignores the very real danger presented by his own party here at home. The virulently anti-LGBT Republican platform, Trump’s choice of arch-homophobe Mike Pence as his running mate, and a campaign based on fear, bias and hatred clearly foreshadow what LGBT people can expect from a Trump administration. It is imperative that the LGBT community do all it can to ensure that Hillary Clinton is the next president of the United States.”
Human Rights Campaign President Chad Griffin said: “While Donald Trump doubled down on discrimination by picking Mike Pence, Hillary Clinton has bolstered her campaign’s historic commitment to LGBTQ equality by choosing Tim Kaine.
“Having proven time and time again that they have the experience, determination, and leadership needed to move equality forward for all Americans, we are confident Clinton and Kaine will tear down the walls of discrimination that hold all of us back.
“The stakes for LGBTQ people in this election couldn’t be higher, and the choice for pro-equality voters couldn’t be clearer.”
Posted by Ulf Raynor at 4:47 PM