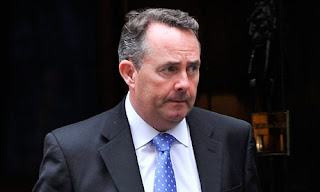 North Carolina was the first US state to pass a law insisting people use only public bathrooms that match the gender on their birth certificate.

The anti-trans HB2 law has been widely criticized by business.

It has led to boycotts or scaling down of investment by Pepsi, Deutsche Bank, PayPal, Hyatt, HP, Levis. The NBA may even pull their All Star 2017 game.

It’s not clear if Fox didn’t realize or has chosen to ignore the controversy.

Fox will tell a business audience in Chicago today:

‘I am pleased to announce today that the UK government plans to open three new offices right here in the United States, in Minneapolis, Raleigh and San Diego.

‘Our ambitious vision for an open and outward-looking UK economy includes growing our footprint in the most important markets around the world and these three cities offer exciting opportunities to boost trade and investment.’

Fox was a leading campaigner in the UK’s bid to leave the European Union.

New UK Prime Minister Theresa May created the job of International Trade Secretary to find new opportunities for the country after the Brexit vote.

Fox’s record on LGBT rights in the UK is poor. He voted against equal marriage, an equal age of consent and access to adoption.
Posted by Ulf Raynor at 5:17 PM