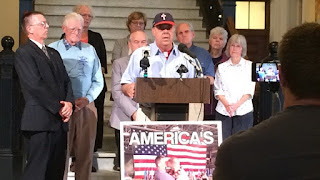 A Christian group under the moniker ‘Equal Rights, not Special Rights’ is campaigning to recriminalize homosexuality in the US.

Its leader Mike Heath said: ‘The war is on.

‘There is conduct that ought to be punished, and Christianity teaches, has always taught and still does teach, that sodomy is such a behavior.’

Heath and other members belong to the Christian Civic League, a far right conservative advocacy group.

The group’s first objective is to remove ‘sexual orientation’ from the Human Rights Act, passed eleven years ago, in the eastern seaboard state.

They are currently collecting signatures ahead of the November election.

‘If it’s removed, what does it do? It very simply moves something, a behavior that belongs in the closet back into the closet,’ Heath told other members of the group.

In the video, posted online by WGME, attendants seem to number in the tens.

Another man from the group held up a banner in front of the people showing two men, one in military dress, kissing.

‘These are two military men, at least one, and there’s an open expression of homosexuality and sexual expression that is totally out of line for a country as great as the United States of America,’ he said.

A representative for Equality Maine told WGME: ‘They think they can force people to accept their worldview. That’s just not what America is, not what the State of Maine is. And it’s not going to work.’

More fake Christians who publicly display their bigotry and ignorance.
If they actually read the Bible, they would know that the word sodomy never makes an appearance in either the old or new testament, that particular word wasn't used until the 1400's.
The word sodomite in the Bible was used to indicate someone of low moral character or any sexual act that consisted of nonconsensual like qualities.
No, what this really is, the further faux outrage created by the GOP, Donald Trump and the hate and rage network that Fox news has become.
This is bigoted white people, whipped into a blood thirsty frenzy and self entitlement by their orange toned, chest thumping, thin skinned rage machine Führer Donald.
As for the closet, I can't speak for everyone, but I think it's these peoples turn to hide in fear, cowering in a dark lonely closet, afraid to reveal who they really are to their family, friends and community.
It's their turn to be publicly and privately shamed for being what they are, let's go even further, let's make being an openly, willfully ignorant bigot illegal with mandatory fines and civil service penalties.