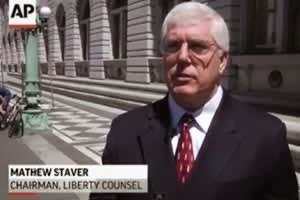 A federal appeals court on Wednesday upheld California's law banning “ex-gay” therapy to minors.
The full Ninth Circuit Court of Appeals let stand an earlier decision by a 3-judge panel of the same court upholding the law, which prohibits so-called conversion therapy that attempts to turn gay teens straight.
Christian conservative groups Liberty Counsel and the Pacific Justice Institute had filed the lawsuit to the law, enacted in 2012, from taking effect. They argued that the therapies are beneficial and that the law violated the free speech rights of counselors.
“The minors that Liberty Counsel represents … are greatly benefiting from this ,” Liberty Counsel head Mat Staver earlier stated. “Legislators and judges in the state of California have essentially barged into the private therapy rooms of victimized young people and told them that their confusion, caused by the likes of a Jerry Sandusky abuser, is normal and they should pursue their unwanted and dangerous same-sex sexual and behavior, regardless of whether those minors desire their religious beliefs to trump their unwanted attractions.”
Supporters of the law argued that such therapies harm young people.


“Today's decision affirms that California can protect young people and their families from being deceived and harmed by unethical therapists who falsely claim they can change a person's sexual orientation,” said Shanon Minter, legal director of NCLR, which defended the law in court. “These practices have no scientific basis and can cause serious, lasting harms that devastate families and destroy young lives. California has a duty to protect the public from deceptive and unsafe practices by medical professionals who are licensed by the state. The Legislature did the right thing by enacting this protective law, and the ruling today strongly confirms that other states should follow California's example and adopt similar laws.”

What Mat fails to point out, absolutely nothing prevents these same people from seeking out this kind of abuse...um, therapy, as soon as they turn 18.
The state has decided to stop misguided parents from *forcing* underage children to under go harmful and destructive treatments from charlatan Bible thumping antigay religious zealots, who have no regard for their victims beyond the depths of their pocket books.