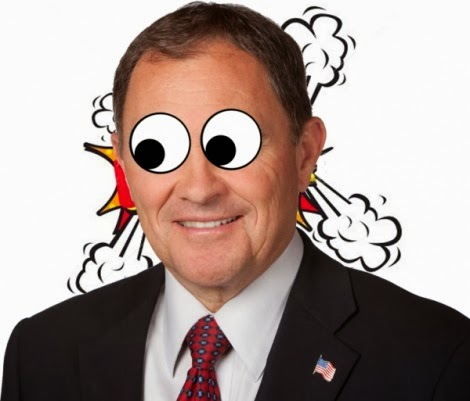 Utah Governor Gary Herbert on Thursday reiterated his for Amendment 3, the state's 2004 voter-approved constitutional amendment which prohibits the state from recognizing gay and lesbian couples with marriage or civil unions.
A federal judge on December 20 struck down Utah's marriage ban. For 17 days before the Supreme Court granted a stay in the ruling, Utah was the 18th state to legalize same-sex marriage. During that time, more than 1,300 gay couples exchanged vows.
Herbert, a Republican, ordered the marriages put “on hold” pending an appeal in the case, v. Herbert.
During his monthly televised news conference from Salt Lake City, Herbert said he was to considering civil unions.
“If there's other ways to get from here to there that can be the common-ground approach, let's take a look at it,” Herbert said.
However, he added that he personally supports the ban.
“I think that's the best way to have family arrangements,” Herbert said of marriages involving a man and a woman. “The best chance for children to be the best they can be.”

This is a Governor who is seeing his states constitutional ban swept away and is now getting a little desperate, so he is now hinting that maybe, just maybe they were wrong for banning civil unions to gay couples and suggesting that maybe they should reconsider?
Explain to me Governor, exactly why should the gay community accept your offer?
We're not so stupid as to believe the GOP would actually follow through with it in the first place.
You offer nothing in exchange for everything....no thanx!