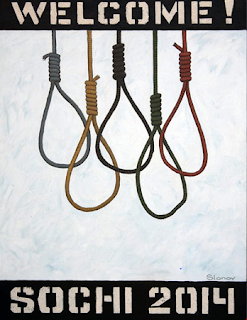 The U.S. State Department on Friday issued a travel alert to Americans traveling attend next month's Winter Olympics in Sochi.
“The Department of State alerts U.S. citizens planning to attend the 2014 Olympic Games in Russia that they should remain attentive regarding their personal security at all times,” the alert states.
The alert mentions the threat of terrorism and reminds gay Americans about Russia's recently enacted law which prohibits the promotion of “gay propaganda.”
“Acts of terrorism, including bombings and hostage takings, to occur in Russia, particularly in the North Caucasus region. … In July 2013, Doku Umarov, the head of the Caucasus Emirate (an organization the United States designated as a terrorist organization in 2010, and known in Russia as the Imirat Kavkaz or IK) released a video message rescinding prior not to attack civilians and calling for attacks on the Winter Olympics in Sochi.”
The alert also warns that foreign citizens found guilty of violating the nation's anti-gay law face up to 14 days in jail and steep fines.

Despite the whole gay propaganda thing, there's a fully active terrorist group which has stated they intend to make the Sochi Olympics a target and have fully demonstrated their ability to back up that threat.
Yet amazingly, they are sending our athletes over there, knowing this?