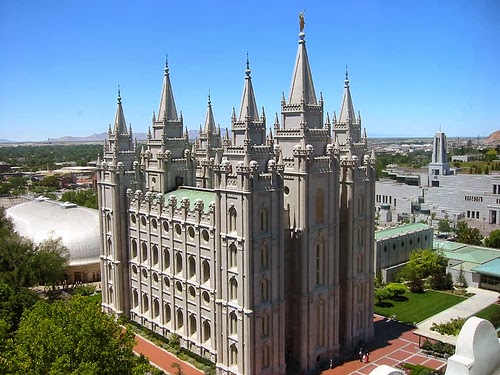 The Church of of Latter-day Saints (the Mormons) on Friday issued a response to a federal judge's December 20 ruling which declared Utah's gay marriage ban invalid.
“Just as those who promote same-sex marriage are entitled to civility, the same is true for those who oppose it,” a statement from the First Presidency and the of the Twelve Apostles to church leaders reads in part. “The Church insists on its leaders' and members' constitutionally protected right to express and advocate religious on marriage, family, and morality free from retaliation or retribution. The Church is also entitled to maintain its standards of moral conduct and good standing for members.”
Mormon leaders reiterated their position that gay nuptials could not be celebrated in the Mormon Church.
“Consistent with our fundamental beliefs, Church officers will not employ their ecclesiastical authority to perform marriages between two people of the same sex, and the Church does not permit its meetinghouses or other properties to be used for ceremonies, receptions, or other activities associated with same-sex marriages.”
In 2008, the Mormon Church faced an angry backlash for its role in the passage of Proposition 8, California's now-ended constitutional amendment which put an end to the marriages of gay and lesbian couples taking place in the state.


The guidance came on the same day that hundreds of people rallied in Salt Lake City to ask Governor Gary Herbert to drop the state's appeal in the marriage case.

Are you religious numbnuts really this fucking stupid or are you so totally devoid of coherent thought, that you can't see that the gay community doesn't give a rats as what your religious beliefs are, believe what you want, practice your religion in your homes and places of worship to your hearts content, hit each other across the heads with 2x4's set each other on fire, we don't care!
What we object to, is you insisting we have too obey your religious beliefs because YOU say so.
As you have the right to believe as you believe, we also are supposed to have the equal right not too.
That's what this is about, you forcing us to live according to your beliefs...to which we say...FUCK YOU!

The library is OPEN!