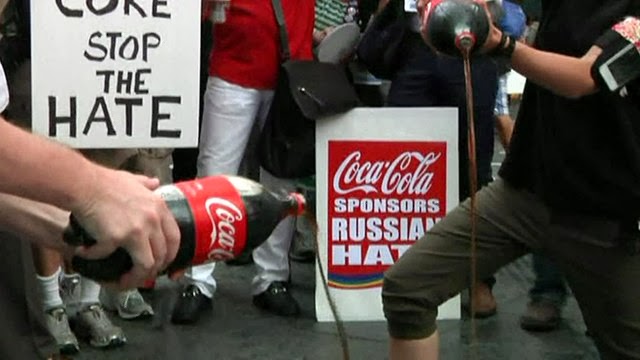 From the Towleroad:
Sochi Olympics sponsor Coca-Cola has removed a social media tool from a website after it made headlines for banning the word "gay".
Said the tool when you tried to type in the word gay: “Oops. Let’s pretend you didn’t just type that.”
Said the company in a statement:


"We are aware that the Share a Coke promotion we are running in South Africa has generated an unintended outcome. We apologise for any offence caused. The Share a Coke programme was created to allow consumers to take the iconic “Coca-Cola” and replace it with their name on the can. In South Africa, the digital version of the Share a Coke promotion did not properly limit the customisation to individuals’ names. We’ve taken down the site and are in the process of revising the digital tool immediately...As one of the world’s most inclusive brands, we value and celebrate diversity. We have long been a strong supporter of the LGBT community and have advocated for inclusion, equality and diversity through both our policies and practices. Again we apologise for any offense this has caused."
Posted by Ulf Raynor at 5:58 PM