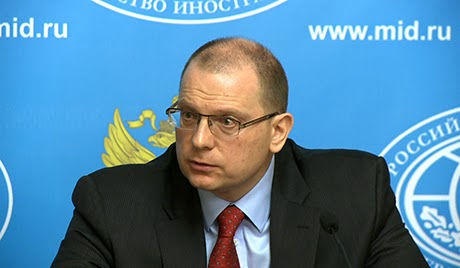 A Russian official has accused the European Union of trying to impose an “alien view” of homosexuality on other countries, and of misusing the Olympics to do so.
Speaking two weeks before the opening of the Winter Olympic Games, Russian human rights official Konstantin Dolgov criticized EU members for seeking to influence Russia’s anti-gay laws, and for using the Olympics as a political pawn.
Speaking to press in Brussels, he said: “If a skater is planning to come as a member of the Olympic team not to compete, but to fight against a law in the host country, it is very bad. It means that this particular skater does not respect Olympic principles.”
He was in Brussels to launch his study on civil liberties in the EU, which says: “Attempts have been made to enforce on other countries an alien of homosexuality and same-sex marriages as a norm of life and some kind of a natural social phenomenon.”
He also said in an interview with The Voice of Russia: “There is absolutely no discrimination of LGBT community in Russia as such. There definitely are some incidents, but incidents happen everywhere.”

“I had to counter the widely and wildly politicized views expressed by some representatives of the so-called Russian human rights community.”

"So-called Russian human rights community?
Do you mean those people who fear your governments oppression of their gay citizens?
Or is it just anyone who disagrees with your policies?
As for using the Olympics as a political pawn...as I and many others see it, the IOC has violated it's very own charter by allowing the Olympics to be held in your country in the first place!
Correct me if I'm wrong, but didn't Russia decriminalize homosexuality awhile ago, after the fall of the communist regime or is it your assertion that Putin is taking you back to the "Good Ol Days" and so you feel compelled to re-activate the old barbaric policies of that defunct system of governance?
You should be careful how you word things Konstantin, you are basically publicly admitting your government has an aggressive agenda against homosexuals by calling them an *unnatural  phenomenon*, something ol' Putin say's isn't happening, or is he, like you, a big liar?
I'm putting my money on the latter...

Sucks when the pressure is on and your in the spotlight doesn't it Russia.