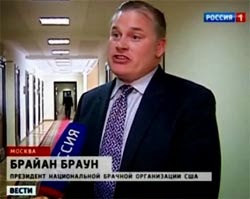 During an appearance on MSNBC's UP, Brian Brown, of the National Organization for (NOM), faced a hostile crowd.


On the program, Brown disagreed with host Steve Kornacki's conclusion that a majority of Americans now marriage equality.


“When it comes to same-sex marriage, we're talking about a country in the last 15 years that has fundamentally changed majority support for this,” Kornacki said.


“I actually disagree with that. Of course the polling has moved. Why would the polling not move in the direction of redefining marriage when you have almost all of the elites trying to bludgeon and put down people who disagree with this new orthodoxy as somehow …,” Brown said before being interrupted.


Brown later added that if his side loses a proposed constitutional amendment in Indiana to limit marriage to heterosexual couples next year, his group would “continue and stand up and fight in and out of season for the truth. And the truth is, and Americans know this, the truth is there is something unique and special about men and women coming together in marriage and that is not bigotry.”


Aisha Moodie-Mills of the Center for American Progress disagreed.


“You know I'm reminded, it's a very short history here, of all of the arguments that were made to support Jim Crow laws, to support slavery, right? All the kind of anti-miscegenation that was happening. And it is absolutely the same type of bigotry. What we're talking here is a group of people who think that because there are other folks who are different they should be treated differently under the law,” Moodie-Mills said.