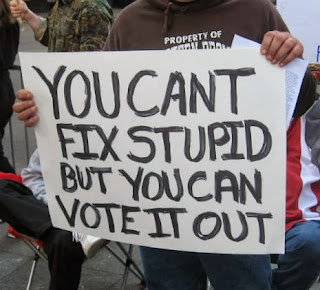 
“Folks, they [gay people] want free medical because they're dying [when they're] between 30 and 44 years old. To me, it's a moral issue. It's a Biblical issue. Traditional marriage is where it should be and it's in our platform. Those in our party who oppose traditional marriage are wrong,” Agema told a Berrien County Republicans audience on Thursday, The Herald-Palladium reported.


“We cannot win without the independents and the Tea Party, so get over it, folks,” he said. “You're going to have to get along with these folks.”


Agema, a former pilot, said that while working at American Airlines he saw gay workers falsely claim HIV-positive persons as their spouses to secure medical benefits for them.


Agema was severely criticized in March after he promoted an article which described gays as “filthy homosexuals” in a Facebook post.

Well Mr. Agema, even if this were true, it would only happen because they couldn't get health care coverage any other way...typical faux Christian Republican...I mean, after all, we all know the basic message of Jesus Christ was: "Everyman for himself"
If this is the best the RNC can offer in leadership, we should quickly see the extinction of the party.
Posted by Ulf Raynor at 5:21 PM