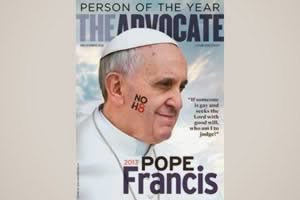 Gay glossy The Advocate has named Pope Francis its Person of the Year, a move that is proving controversial.


An image of the Holy Father with the NOH8 Campaign's familiar black and red “NOH8” slogan written on one cheek graces the magazine's December cover.


In selecting its recipient, Advocate editors said that they were looking for the “single most influential person of 2013 on the lives of LGBT people.”


Francis, also named TIME Magazine's Person of the Year, has distanced himself from previous popes by lowering the decibel level on several controversial issues, including gay priests.


“Pope Francis's stark change in rhetoric from his two predecessors – both who were at one time or another among The Advocate's annual Phobie Awards – makes what he's done in 2013 all the more daring,” editors wrote.


In the United States, however, Catholic leaders have continued to oppose gay rights. For example, Catholic bishops in Indiana this week unanimously called on voters to prohibit gay marriage in the state, saying that it was harmful to children and society.


“My how easily we forget all the horrible things this man said about us before he became Pope,” wrote Chris Sullivan on the magazine's website. “Teachers are still routinely fired for being gay and the Catholic church is still front and center in actively denying us our civil rights everywhere in the world that they can.”


Tyler Bates defended the choice, saying that Francis “is the first to say something remotely compassionate when it comes to homosexuality. He may not have said everything you want to hear, but his statements have a huge impact on his followers.”
I have just one question, exactly what has the Pope said that would make you think he's pro gay rights?
Oh wait, I know, absolutely nothing.
What he has done is confirm the churches stance, by referring all to what the catechism teaches, (which is totally anti-gay)
Are we so desperate as a community, that we grasp and cling to the merest of morsels of acceptance from this hate group?
Is the Advocate even owned and operated by gay people?
One must wonder.
Posted by Ulf Raynor at 5:22 PM

The Advocate is written purely for the white, monogamous, suburban, upper-middle class gay men who merely stand around clutching their pearls weeping. Not the kind of person that actually takes to the streets to fight for the rights and recognition that have been demanded.

The bigot-in-the-stupid-fucking-hat is by absolutely no means pro-gay. He's isn't even ambivalent towards us since the organization he leads still persecutes sexual minorities at every opportunity it gets.

The Advocate is still in print? Who knew???

This will get them more attention than they've had in a decade or more.