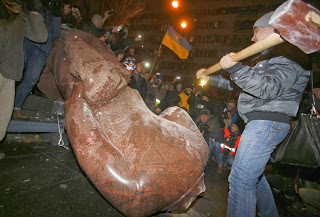 Todays rally marked a further escalation in weeks of confrontation between the authorities and protesters that have raised fears for political and economic stability in the former Soviet republic of 46 million people.


"This is a decisive moment when all Ukrainians have gathered here because they do not want to live in a country where corruption rules and where there is no justice," said world heavyweight boxing champion-turned-politician Vitali Klitschko.

European Commission President Jose Manuel Barroso urged Yanukovich in a phone call on Sunday to seek a dialogue with his opponents and to respect civil freedoms, the EU executive said. EU foreign policy chief Catherine Ashton will visit Kiev this week to help seek a way out of the crisis, it said.

Ukraine's opposition accuses Yanukovich, who met Russian President Vladimir Putin on Friday, of preparing to take the country into a Moscow-led customs union, which they see as an attempt to recreate the Soviet Union.

"We are on a razor's edge between a final plunge into cruel dictatorship and a return home to the European community," jailed opposition leader Yulia Tymoshenko said in an emotional message to the crowd, read out by her daughter Yevgenia.

Yanukovich has said he decided to shelve the EU trade deal because it would have been too costly for Ukraine's struggling economy and the country needs more time to prepare for such a move. He says he is preparing a "strategic partnership" with Russia, but has not committed to joining the customs union.

Both countries denied that Putin and Yanukovich discussed the union when they met on Friday in the Russian Black Sea resort of Sochi, but further talks are planned for Dec. 17.

Yanukovich and Putin, who regards Ukraine as strategically vital to Moscow's own interests, are widely believed to have struck a bargain whereby Ukraine will get cheaper Russian gas and possibly credits in exchange for backing away from the EU.
Posted by Ulf Raynor at 4:45 PM