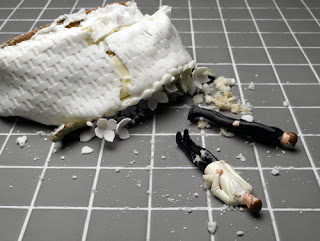 A judge ruled Friday against a Colorado baker who refused to make a wedding cake for a gay couple.


Phillips last year refused to consider baking a cake for Dave Mullins and Charlie Craig, who have since married in Massachusetts and held a reception in Denver. Phillips said that serving the couple would violate his religious faith. Colorado recognizes gay and lesbian couples with civil unions, not marriage.


The couple sued, claiming that Phillips' faith does not give him a right to discriminate.


Spencer ordered Phillips to “cease and desist from discriminating” against gay couples, but did not impose a fine.


Phillips' attorney Nicolle Martin told the AP that Phillips “can't violate his conscience in order to collect a paycheck.”


Martin would not say whether an appeal was in the offing.


Phillips previously stated that he would rather shutter his business of 20 years than support same-sex marriage.


“If it came to that point, we would close down the bakery before we would compromise our beliefs, so that may be what it comes to. We'll see,” he said, adding that it was “nothing personal” against gays.


“If gays come in and want to order birthday cakes or any cakes for any occasion, graduations, or whatever, I have no prejudice against that whatsoever. It's just the wedding cake – not the people, not their lifestyle,” he said.
"It is antithetical to everything America stands for"... Bitch, who do you think your kidding?
All one has to do is substitute black, Hispanic, Jewish, Catholic etc. with the word *gay* in this story and every known religious/political group in the country would be crying foul.
The real crime here, is Jack trying to pretend he's the victim here, all while hiding his bigotry, like a coward, behind a faux religious front.
With statements like “nothing personal against gays" and it's "not the people, not their lifestyle" he digs the very hole he's standing in.
Explain Jack, exactly how are we supposed too take this and what's next, gas stations refusing to sell us gas, grocery stores refusing us food?
In most of this country, gay people can still be refused housing, lodgings and employment for who they love and people just like you feel no remorse for the evil you inflict, so even if you lose your business and your lively hood, why should I show anymore concern, for your self inflicted wounds, than you and your ilk, show for us for something we have no control over?