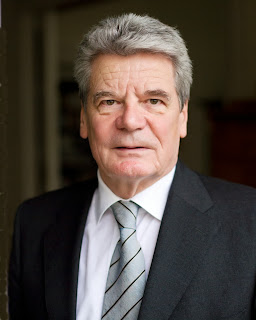 From the Towleroad:
German President Joachim Gauck is the first world leader to boycott the Sochi Winter Olympics, the Guardian reports:

According to German weekly Der Spiegel, Joachim Gauck last week informed the Kremlin of his decision, which is understood to be a response to the Russian government's violations of human rights and harrassment of the opposition.

Gauck, a former Lutheran pastor who played a key part in the East German protest movement before the fall of the Berlin Wall, has declined any official visits to Russia since coming to office in March 2012 and repeatedly criticised the country's "deficit of rule of law" and "air of imperialism".

In June, a scheduled meeting between Gauck and his Russian counterpart, Vladimir Putin, was cancelled – supposedly because of clashing schedules. Gauck had visited both the Olympics and the Paralympics in London last summer.
Though this is good news, truthfully, as I understand it, the real head of state in Germany is chancellor Angela Merkel who has stated she is against boycotting the Sochi Olympics, not surprising considering how she continuously obstructs marriage equality in Germany.
Posted by Ulf Raynor at 2:26 PM

Joachim Gauck is indeed the Head of State for Germany. Chancellor Merkel is Head of Government.