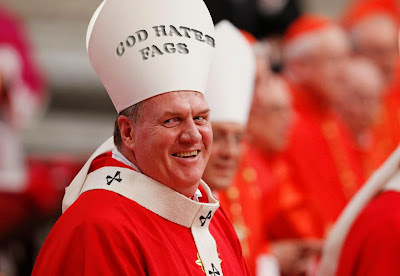 As the Indiana General Assembly prepares to consider a proposed constitutional amendment which would ban gay marriage in the state, Indiana's six Roman Catholic bishops have weighed in on the issue.


In a December 4 joint statement, the bishops said that they “respect the equal dignity of all persons” but marriage is the “intimate communion of life and love between one man and one woman.”


“With deep respect for all our brothers and sisters, we affirm the institution of marriage as the intimate communion of life and love between one man and one woman. Marriage is an intimate sharing of conjugal life and love. It involves the total gift of self in a partnership for the whole of life. Only by means of the complementarity between a man and a woman can this total gift of self be fully given and received,” the bishops wrote:


“We respect the equal dignity of all persons while upholding the uniqueness of the covenant of marriage as established by our Creator. The well-being of children, of the family, and of society is closely bound to the healthy state of marriage and respect for its true nature and purpose.”


Without naming the upcoming debate, the bishops “urged the people of Indiana” to “defend the dignity and … truth about marriage, according to God's plan and law, with charity toward all.”


“On the one hand, I hope that the statement serves to affirm the great esteem we afford to the institution of marriage, a way of life that is prior to the nation-state and any government,” Indianapolis Archbishop Joseph Tobin said. “On the other hand, we hope to reinforce the dignity of every human being, whom the Church accepts as a unique creation of our loving God.”
These Bishops insist that good Catholics vote their *conscious* and define marriage as being exclusively between one man and one woman, and state that other legal unions “identical or substantially similar in whole or in part, to that of marriage” not be recognized by the state.
This is the Catholic church respecting the equal dignity of all persons?
My question, I guess, is simple...explain to me how your showing gay men and women anything that could be considered equality and dignity with  "charity for all"?
Your words are double speak, you extend the olive branch with one hand and a poisoned dagger concealed in the other.
Personally, I think they should abolish all civil acknowledgement and exemptions for marriage, including civil unions etc. all tax breaks should be abolished and the unfair tax structures that force gay/single people to financially support heterosexual marriages and their offspring.
They wanna have kids, let the catholic church offer financial assistance, why should gay people be forced to recognize their unions with our tax dollars?
To date, I can't think of a single major religion that hasn't politicized this "One man one woman" movement...if they want to use their pulpits for political gain, then they should be considered political activist, not religious institutions and have their tax exempt statuses revoked.