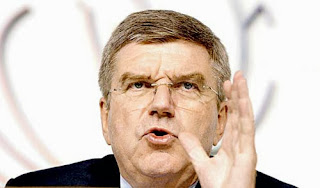 From The Towleroad:
In addition to the announcement that the IOC will send a letter to athletes and participants at the Sochi Games reminding them to refrain from engaging in demonstrations, political gestures, or protests while in Russia, the IOC said Russia will be creating "protest zones" for people to do just that, the L.A. Times reports:

The announcement came during a news teleconference held by International Olympic Committee President Thomas Bach.
"This was under discussion with the IOC for quite some time," Bach said. "This is a measure we welcome so that everybody can express his or her opinion."
The Games in Sochi have become particularly controversial because of Russia's recently enacted anti-gay legislation threatening prosecution of anyone who, in the presence of minors, promotes "nontraditional sexual relations."
Critics worldwide have condemned the law as a violation of the right to free expression, saying the measure effectively bans events such as gay rights parades. Bach did not offer any details about the size or location of the zones.
He said Russian officials have assured him protesters will not face negative consequences. "I think this is the purpose of these protest zones," Bach said. "This is what we’ve been discussing with Russian authorities."
Thomas Bach has his nose shoved up Putins ass so far he can tell what he ate for breakfast last week.
This is supposed to appease the gay community?
Do we look that fucking stupid?
I think the very first act of protest in these "protest zones" should be naked effigies of Bach blowing Putin which are urinated on by the protesters before smothering them in gasoline and set ablaze.  (of course, this protest should be plastered all over Facebook and Youtube for the entire world too see.)
Posted by Ulf Raynor at 4:47 PM