Woman Responds To Anti-Gay Neighbors With Gayest Holiday Lights Ever 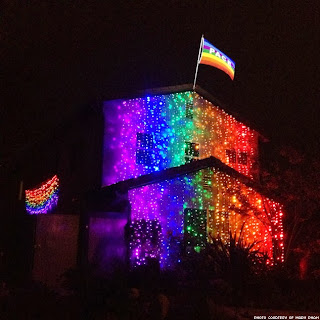 From Shewired:
An Irvine, Calif. woman raised a rainbow flag on her home in a show of support for LGBT people last April only to become the target of antigay rhetoric and hate mail, reports The Pleasure Chest.com. But don’t worry, because Dr. Mary Pham beat the hate with an absolutely brilliant response that is actually also perfect timing for the holiday season!

Pham raised her pride flag last spring as her neighbors were raising seasonal and sports flags. A friend had warned her against the rainbow flag saying, “Not in Irvine, Mary,” but Pham hung her flag despite the protestation, according to our friends at the Pleasure Chest.

Within a few months Pham heard stories that some of her neighbors had penned hateful letters to the Home Owners Association. One person deemed Pham’s flag a “fag flag.”

In the face of controversy Pham consulted with The Center OC, the local LGBT center, and the director there suggested she file a police report as a precaution.

Just this month she was interviewed for the OC Weekly and Pham told the paper that she had decided to fight hate with love (and thousands of sparkly rainbow lights). Here’s what Pham and her son did to make the biggest statement she could think to make!

Found this while perusing my fave news sites Xmas evening and thought it was a perfect end to the holiday.
Posted by Ulf Raynor at 4:05 PM