Who Knew A Pile Of Shit Could Speak? 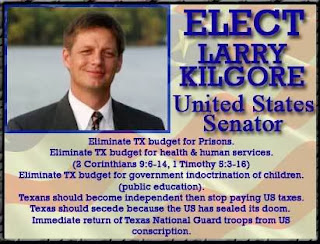 
Kilgore, a telecommunications contractor who in 2012 changed his name to Secede in capital letters, is a perennial GOP gubernatorial candidate in Texas.


“The only position I have is secession,” Kilgore told Lone Star Q last week. “I am a Christian, and I have lots of Christian beliefs. However, I am trying to build a coalition of all different types of people. I look at the lesbians and the homosexual folks and I say, 'Hey, D.C. is stealing my money just like they're stealing your money.' After we get our freedom, then we can decide all that stuff – hopefully at a county level. Right now, lesbians and homosexuals and Christians may have differences with each other, but we've got a bigger enemy.”


But when pressed on his stance on LGBT rights, Kilgore stated that homosexuality is wrong “according to God's word” and that gays should be punished.


“According to the Bible, [the punishment] should be execution, if anyone participates in that activity,” he said.


However, Kilgore insisted that he would “support” a gay candidate “that was a secessionist.”
If this is the best that Texas has to offer...if they don't succeed in their attempt at secession can't we help them and vote them out of the Union?